We missed a Shout Out last month!  So, this month we are doing 2!! 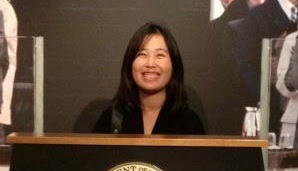 Our next June Shout out goes to....JENNIE YAMAKI!

Ms. Jennie Yamaki is a kick butt Line Producer based in Los Angeles that everyone should know!  Jennie is honestly one of the most patient, hardworking and detail-oriented people we have ever met.   She gets the job done quickly, efficiently and ALWAYS under budget.  So, in other words…she gets the job done right!  Jennie also has an amazing network and puts together some of the best crews, because everybody loves working with her.  We are no exception.

Before we met Jennie back in 2011, she served as Director of Physical Production for Mandate Pictures and oversaw projects such as Stranger Than Fiction, Juno, Harold & Kumar Escape from Guantanamo Bay, Whip It, and Nick & Norah's Infinite Playlist.   For us, she Line Produced the first season of Little Women, Big Cars and the Comedy Central pilot, Jimmy Pardo Needs Jokes.

When she has a break, Jennie likes to spend her time in Hawaii…because that’s where she’s from!  The lucky girl!