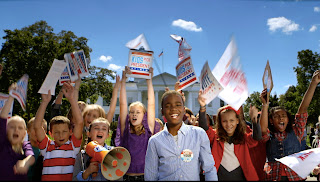 Kids Pick the President, a campaign that we produced for Nickelodeon last fall, has been nominated for an Emmy!  How exciting!

The campaign, which encouraged kids across the country to have a voice and go online to vote for who they thought should be President, was shot in Washington DC at such iconic locations as the White House, the Capitol Building and the Lincoln Memorial.  Over forty kids were featured in the campaign, helping us "get the word out" to other children.  David Rosen directed the spots, which were written by Nickelodeon's Erica Ottenberg.

A huge thanks to the team at Nickelodeon for including us in this campaign and to our entire cast and crew who worked their butts off to make it happen.  You guys are all great!  Congratulations to everyone involved!